In a representative democracy, voting is the way we choose those who will adopt laws on our behalf. It is therefore essential that, for the election of our European representatives, our voting system be fair and efficient, and guarantee the same rights to all. This page introduces the current EU voting system and proposes a new and improved framework.

Current European elections suffer from three major deficiencies: the lack of a unified voting system across the EU, the voting mechanism currently used, and the absence of true European parties.

The lack of a unified voting system

Although empowered to do so by the Lisbon Treaty, EU institutions have not been able to agree on a unified voting system for the election of the Members of the European Parliament (MEPs) – our only European election. Member States therefore organise elections according to their own national rules, with only the following common guiding principles:

As a result, EU citizens are not equal before the vote. For instance:

These major differences of treatment for supposedly-common elections run directly against the fair and democratic representation of EU citizens and maintain a strong national tone to European elections.

As indicated above, EU elections have no official voting mechanism. The common principles simply state that Member States must use a form of proportional representation, under either the party list or the single transferable vote system.

As a result, all Member States – even the ones with multiple constituencies – heavily rely on lists of candidates. Such lists make it easy to ensure proportionality: most often, voters pick a list, and lists receive a percentage of the seats matching their percentage of the vote.

However, lists also contribute to a hard distance between citizens and their officials, as citizens vote for a party rather than for a person and rarely know the candidates on the list beyond the lead candidate. As a result, citizens have no direct point of contact for their local constituency in Parliament and do not know who represents them. Furthermore, in the case of larger parties with somewhat guaranteed shares of the vote, many on the lists do not need to campaign, as their election is more or less guaranteed.

The absence of true European parties

Lastly, the European Union lacks true European parties. At present, European Political Parties, or Europarties, are defined as coalition of national parties. So, even though Europarties are officially the ones running for elections and sitting in the European Parliament, campaigns and programmes are mostly handled by national parties: they decide on the lists of candidates, choose their electoral programme, run under their name and logo, and finance their campaign.

A direct consequence of this nationalisation of European campaigns is that programmes and proposals, designed and embodied by national parties and politicians, cater to a purely national electorate. Campaigns are therefore carried out mostly on national issues and with the goal of proposing solutions in line with the national interest of Member States.

By keeping the voting system and the parties national and by sticking with a poor voting mechanism, Member States have created an unequal and inefficient election for European citizens. But none of these issues is a fatality and, with the right amount of political will, a much fairer and more democratic system can be adopted.

In order to strengthen European elections, we must adopt a unified voting system for all Member States, choose a more efficient and democratic voting mechanism, and ensure the creation of true European parties.

When talking about a unified voting system, let us keep in mind that we are talking about European elections, and not national or local elections. For the time being, this only concerns the election of MEPs, but, in our proposal for reformed EU institutions, we extend this system to the election of the newly-created position of President of the EU and to the Senators.

In this new system, criteria of eligibility would apply to all European citizens, as follows:

Voting would take place on the same day across the EU.

If we are to consider several elections, it also becomes important to ensure that these elections are synchronised. In effect, election periods are an interruption to the regular policy cycle and, however important they may be, it would be detrimental to the quality of the political life to live in constant election times.

This is why we propose the following: 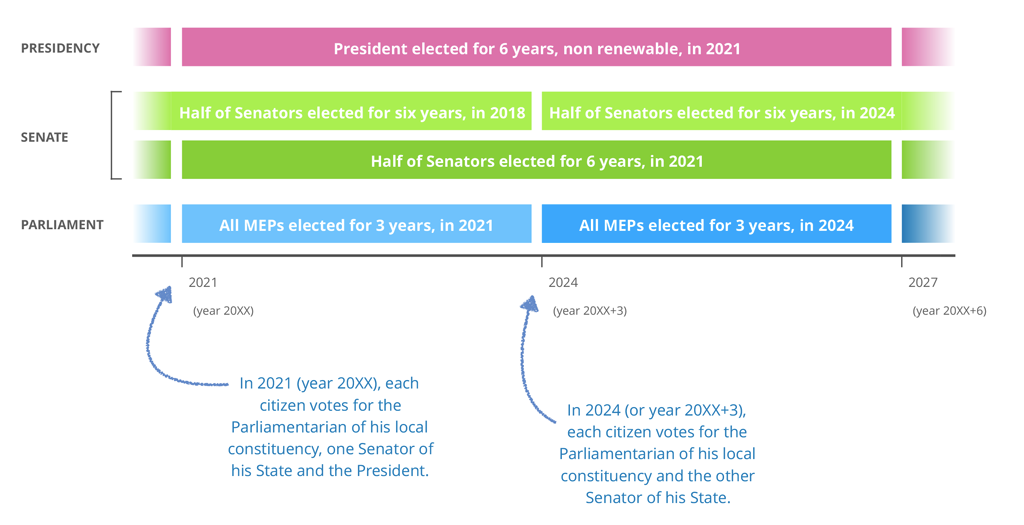 The choice of a given voting mechanism has a major impact on the representativeness of our elected officials. As noted above, a purely list-based system creates a great distance between citizens and their elected officials. However, electing representatives purely on a local basis does not ensure proportional representation in Parliament and disproportionately advantages larger parties, leading to great distortions between the electorate and the composition of the Parliament.

We therefore propose an intermediary solution. As for the election of the Bundestag – the German lower house –, voters cast two votes on the same ballot: one for a locally-elected official, and one for a party. The first vote is used to elect a representative from a local constituency. The second vote is used to ensure overall proportionality. This is essential, as it prevents a single party from obtaining a large majority in Parliament simply by winning with short majorities locally. With this system, citizens have, at the same time, their own local representation and the guarantee that the electorate’s political preferences will be found in Parliament.

But we must go further. In uninominal majority voting – whether with one or two rounds –, the candidate with the biggest minority wins (or makes it to the second round). Candidates with similar ideas may therefore compete for votes and fragment their common electorate. As a result, a candidate may win the election not because their ideas are more supported, but because their electorate is more concentrated. This tends to advantage more extreme candidates and leads to strategic voting, whereby citizens vote not on their convictions but based on a candidate’s perceived chances to win.

Majority judgment is a simple and innovating method of voting which prevents strategic voting and avoids regular voting paradoxes. It works by attributing a “mention” to all candidates, ranging from “excellent” to “rejected”. Voters can therefore assess each candidate separately. Results are found by looking at the best mention attributed to each candidate by 50% of the population – therefore, the majority.

By design, two candidates with similar opinions can be assessed positively and will not steal votes from each other, which prevents strategic voting and encourages an honest assessment of the candidates by citizens. Majority judgement also allows a much fuller representation of citizens’ opinion than the simple choice of one single candidate; it also prevents the emergence of a damaging two-party system and the subsequent polarisation of political opinions into two opposite camps. As such, it supports a much more mature and diverse political debate. More details can be found in our Q&A.

We propose using majority judgment for the election of the President of the EU, of the senators, and for the direct “local” vote for MEPs.

The following illustration shows the constitution of Parliament as well as a proposed voting card for Parliamentary elections.

The last piece of the puzzle is the creation of true European parties, in lieu of the current coalitions of national parties. Political parties aim at promoting what they see as the general interest of their constituency. This is why, at the national level, nation-wide parties cater to the interest of the national population as a whole and proposes a political model to all.

In practice, European political parties only serve in the European Parliament: they are absent from the national scene and have almost no direct contacts with citizens outside of Brussels. As a results, political solutions presented to citizens are essentially made by national parties and only respond to the interest of the national constituency, not to all European citizens.

This essential reform can be achieved though a reform of the status of Europarties and the right incentives, such as:

Through this change in status and administrative and financial incentives, we can push for the creation of true European parties. Of course, current national parties are solidly entrenched in the national political life and they must not be destroyed or banned, but we must give them an incentive to truly come together as European parties.

For more on institutions and voting systems, you can continue on to discover our proposed European Constitution and our detailed Q&A.