The difference between unitary States, confederations and federations lies in who holds the power, between the various levels of government. 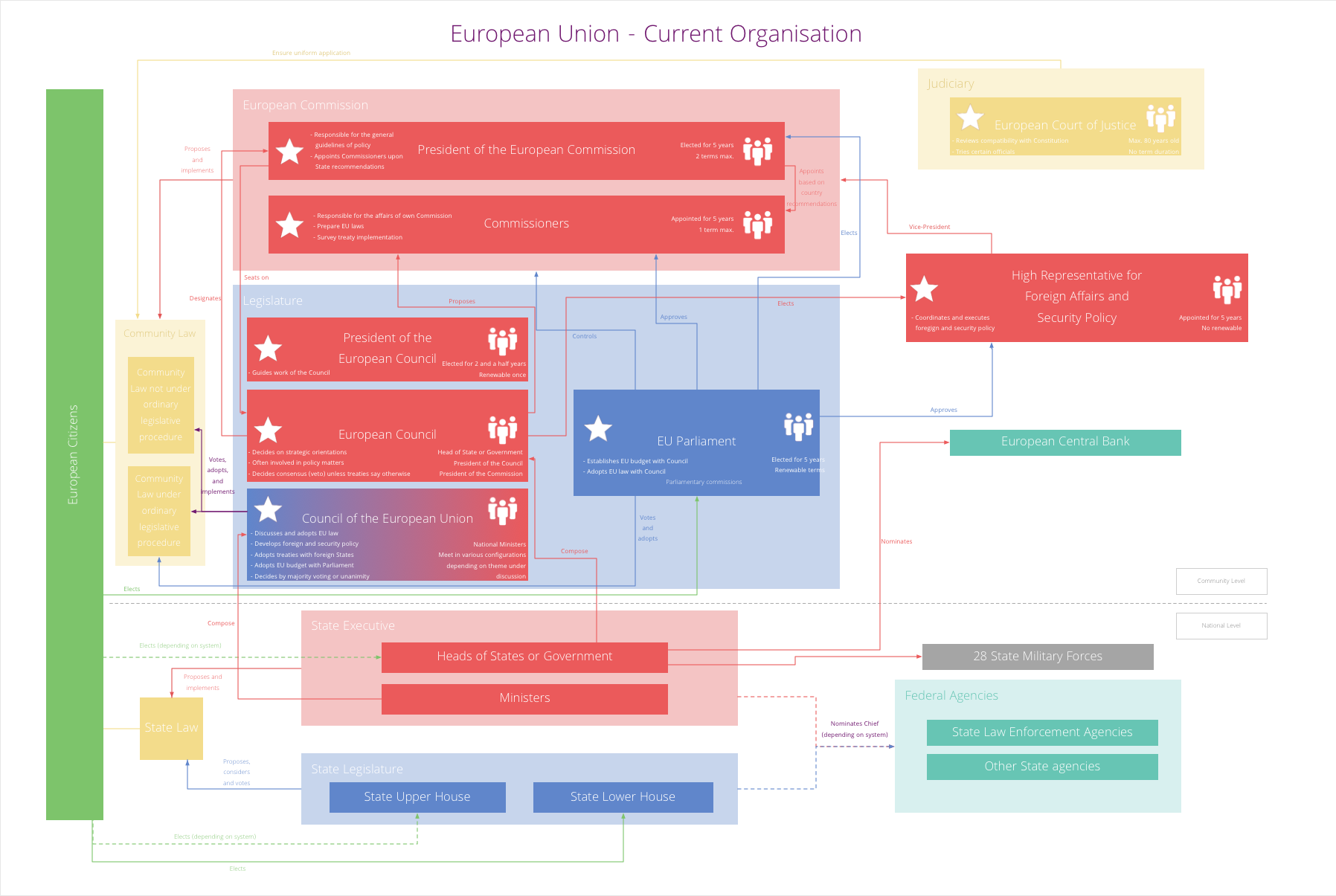 At it currently stands, the European Union is, by and large, a confederation. It is arguably an advanced form of confederation: monetary policy, for instance, is a fully federalised competency. However, the EU still lacks its own independent sovereign that defines a federal entity.

This absence means that decision-making usually proceeds (or can be required to proceed) by consensus and requires subsequent implementation by the Member States to take effect, resulting in slow and inefficient government. The European Union often responds too little too late, even when circumstances require quick and forceful action.

This intergovernmental system of decision-making also gives undue power to the more powerful States, who can try to impose their decisions and block initiatives they oppose. With no overarching structure, each State is incentivised to pursue its own gain and stall what it perceives to go against it. Overall, this system makes it far easier to block than to build, and compromise solutions end up being the smallest common denominator.

However, global challenges – such as climate change, tax justice, social inequality, and the rise of strong players worldwide – require us to put an end to this detrimental internal bickering and come together for our common benefit, efficiently and democratically. The need to work for a better future is more important than to preserve an already-eroded sovereignty from the past; we must see the bigger picture and reform our institutions to gives ourselves the possibility to act.

The proposed European Constitution does just that and defines reformed institutions for a democratic, transparent and efficient government, as we all already expect from our national institutions. We should expect no less from our European institutions. Currently, the EU is multi-headed, with very asymmetrical power relationships between the branches of government and a detrimental interference of national executives in the EU law-making process. We will here focus on the main institutions only.

The European Commission is the executive body of the EU. It is responsible for proposing legislation, implementing decisions, upholding the EU treaties and managing the day-to-day business of the EU. It also holds the monopoly of legislative initiative, meaning it is the only body that can propose European laws. In some instances, such as competition law, the Commission even holds quasi-judicial powers.

Its President is nominated by the European Council, made up of the Heads of States or Governments. Introduced in 2014, the “Spitzenkandidat” system aimed at linking the choice of the President to the result of European elections, by pushing the European Council to choose a candidate endorsed by European parties; there has since been a push back from several Member States wishing to keep this an intergovernmental decision and away from the popular vote.

The Commission comprises one Commissioner per Member State, each nominated by the national executives. In 2009, the Treaty of Lisbon proposed to limit the size of the Commission and break the “one country-one commissioner” rule, but this was overturned by Member States. This runs against basic principles of efficient governance, whereby the number of portfolios should reflect considerations of efficiency, and commissioners should be chosen for their merit and not their nationality.

Furthermore, European elections are carried out at the national level, with only common guiding principles, meaning that EU citizens are not equal in the way they vote. National differences include voting thresholds, financing and advertising regulations, and who can vote. MEPs themselves are often elected on nation-wide lists, making them very remote from the people whose interest they serve. As a result, MEPs have only a tenuous link to their constituents, and citizens hardly know their MEPs.

According to the Treaty of Lisbon, the European Council’s role is to provide strategic orientation; it is explicitly barred from intervening in the legislative process. Despite this, Member States regularly get involved in policy-making and its decisions heavily guide the work of the Commission. The Council of the European Union itself often refers matters to the European Council for decision-making.

The European Council decides by consensus, giving an apparently equal voice to all Member States. At the same time, this allows all States, no matter their size, to block initiatives that they see as going against their national interest. However, proposals do not always come to a vote and intergovernmental discussions give a predominant voice to the executives of the more powerful countries.

The use of consensus is therefore prejudicial both to the efficiency of the Council and to its democracy. The heavy role of national executives in European policy-making is also detrimental to the involvement of directly-elected European representatives.

The Council of the European Union

The Council of the European Union (formerly the Council of Ministers) is the non-elected part of the EU’s legislative branch.

Although a legislative body, it is made up of national ministers, meaning representatives of national executives. The Council meets in various “configurations”: when defence matters are discussed, Ministers of Defence gather; when discussing agricultural matters, Ministers of Agriculture meet.

Depending on the topic under discussion, the Council may decide by Qualified Majority Voting (QMV, a double-majority system) or unanimity. Even when the topic is to be decided by QMV, a number of representatives may require a unanimous decision. Where it so decides, the Council call upon the European Council to take a decision.

The Council of Ministers has a six-months rotating presidency: each Member State in turn leads the work of the Council. Although aimed at giving every State a say in legislative matters, it disrupts the long-term work of the Council and limits the gathering of institutional memory and practice.

As explained in the reasoning for a European constitution, EU institutions have fallen short of their promise and duty of efficient and democratic governance. Part of the burden falls on their flawed design which maintains narrow national interests at the heart of the decision-making process.

The proposed European Constitution overhauls these institutions for more transparent, more efficient and more democratic ones.

At the core of this parliamentary democracy is the legislative branch. The legislature is bicameral, composed of a Parliament, close to the current European Parliament, and of a Senate.

The executive branch is composed of a President and a Federal Prime Minister, heading a Cabinet of Federal Ministers.

Finally, a strong and independent judiciary is composed of a Supreme Court and lower courts in charge of certain trials and of ensuring compatibility of State and federal law with the EU Constitution.

The proposed federal institutions would therefore look like this: 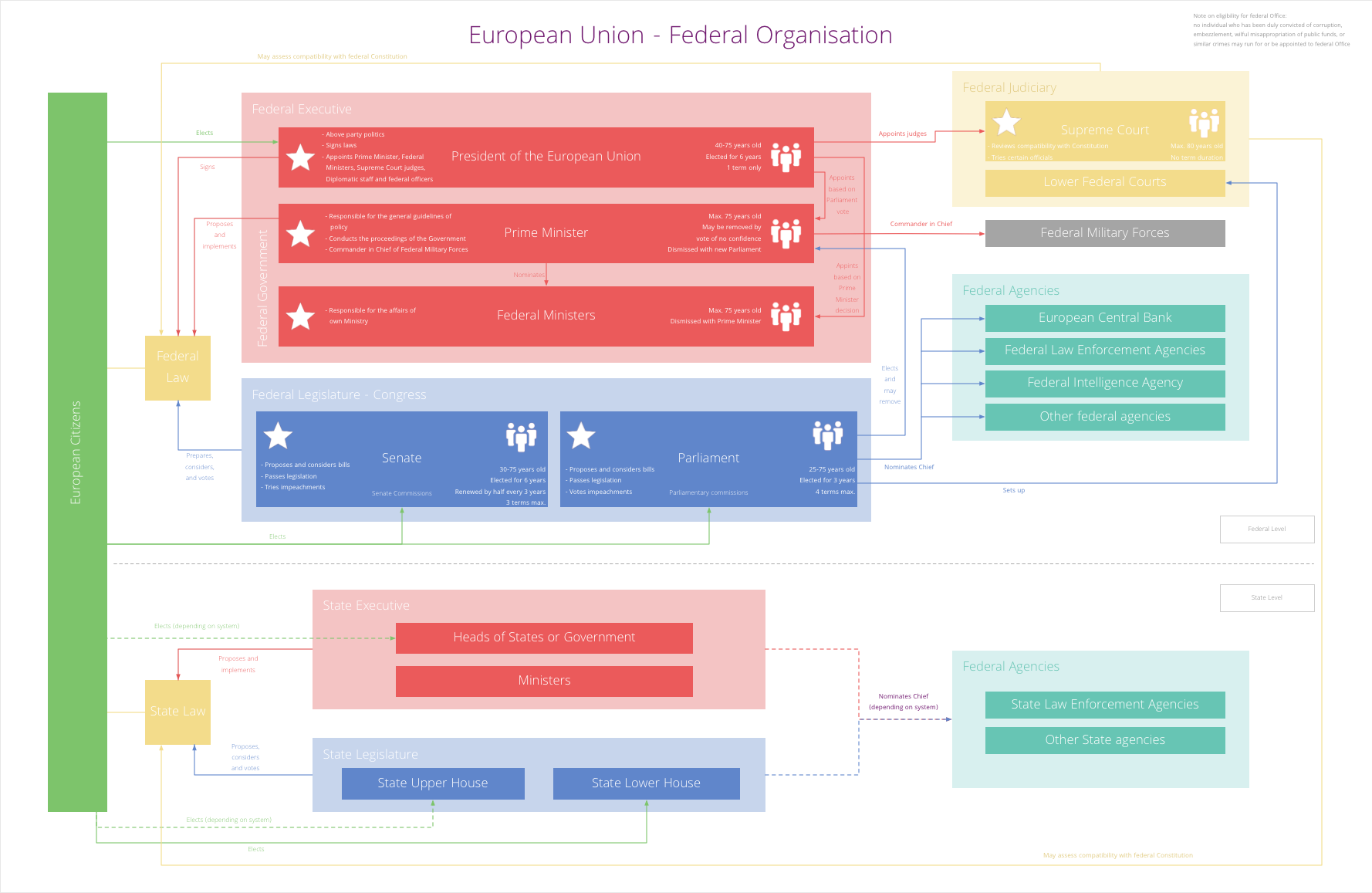 But institutions are not the only part of the EU’s functioning that needs reform: the way we vote for our elected officials is a crucial part in making the EU more democratic and more responsive to its voters. Continue reading here to discover our proposals.